The World is UNDERpopulated


While many myths compete with “the-world-is-over-populated-with-humans” myth for the honor of being the myth with least empirical and theoretical support, no myth surpasses the over-population myth in groundlessness and, really, absurdity pregnant with totalitarian impulses.  I like the take of the Boston Globe‘s Jeff Jacoby:

For more than 200 years the population alarmists have been predicting the worst, and for more than 200 years their predictions have failed to come true. As the number of men, women, and children in the world has skyrocketed - from fewer than 1 billion when Malthus lived to nearly 7 billion today - so has the average standard of living. Poverty, disease, and hunger have not been eradicated, of course, and there are many people in dire need of help. But on the whole human beings are living longer, healthier, cleaner, richer, better-educated, more productive, and more comfortable lives than ever before.
When human beings proliferate, the result isn’t less of everything to go around. The planetdoesn’ t run out of food and fuel, minerals, and metals. On the contrary, most resources have grown cheaper and more abundant over the past couple centuries - in tandem with rising population.The explanation is no mystery. Yes, more babies mean more mouths and therefore more consumption. But more babies also mean more minds and arms and spines - and therefore more new ideas, more effort, more creativity, more initiative, more enterprise. “Human beings do not just consume, they also produce,’’ writes George Mason University economist Bryan Caplan. “The world economy is not like a party where everyone splits a birthday cake; it is more like a potluck where everyone brings a dish.’’

And see here just how out of touch with reality is the myth of over-population.  (HT Chris Meisenzahl). 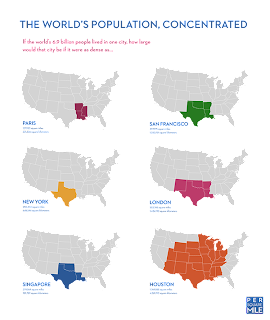