The Path to Prosperity


If you want to know why some countries are rich and others are poor, a good starting place is this graph, which I took from the first edition of David Weil’s quite marvelous textbook on Economic Growth: 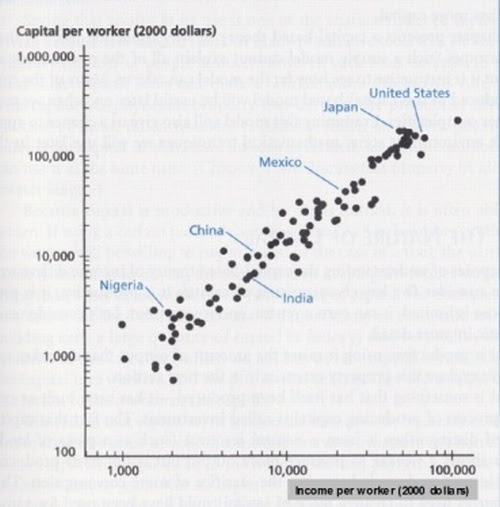 Because I took this from Weil’s first edition, these data are several years old, and some countries might have moved up or down the ladder since then. But the overall picture is clear: More capital per worker means more output per worker, and more output per worker means more income per worker. This relationship — in fact, the nearly linear relationship that you see on the graph — is just what standard economic theory predicts. It’s nice to see that prediction so powerfully confirmed.
Capital here refers to physical capital — the machinery, factory space and office equipment that allows workers to be more productive. A garment worker with a sewing machine produces more blouses per hour than a garment worker with a needle and thread; therefore the garment worker with a sewing machine earns higher wages. (A good rule of thumb is that workers are paid about 2/3 the value of what they produce.) If you want rich garment workers, you need a lot of high-quality sewing machines. If you want rich farm workers, you need a lot of high-quality tractors.
And if you want more high-quality tractors, you need more factories producing them — which means fewer factories producing consumer goods like, say, cars. That in turn requires consumers to rein in their immediate appetites, spending less and saving more. In other words, capital accumulation is driven in part by frugality. Forgo that car purchase and the factories will produce another tractor instead. That’s why tax policies matter. A tax that punishes saving (e.g. the estate tax) is a tax that encourages spending. Because of that tax, the rich buy more cars, the factories produce fewer tractors, and farm wages fall. If you doubt that farm wages depend heavily on the production of tractors, have another look at the graph.
Do not, however, jump to the conclusion that if, say, Nigerians had access to Japanese levels of capital, then Nigerian wages would rise to Japanese levels. Part of the reason Nigerians have so little capital is that capital is used less efficiently in Nigeria, so people choose to accumulate less of it. To move up this ladder, you need to do more than just accumulate capital — you’ve got to be the sort of country where capital is worth accumulating. What that entails will be a topic for a future post.
Fecha abril 13, 2012